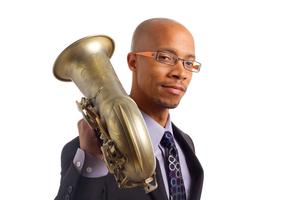 Kris Brownlee is a member of the Class of 1996. Read more about his life since graduation in our Q&A.
What is your current occupation?
I'm currently a national recording artist/film composer signed under Megawave Records. I write and record original contemporary jazz music. I have released 4 albums, "Bitten by the Jazz Bug," "Gettin' Down," "Sincerely Yours," which I co-wrote with Grammy Award winning producer, Michael Broening, and my most recent album, "Breathe: Night Sessions." I also perform on tour at national and international venues and have recently begun writing orchestral scores for film and video games.
What led you to your current occupation?
The short answer is tons and tons of hard work. However, when I look back on my journey it really began in 4th grade when I first started playing the saxophone. I continued to perform in the concert and jazz bands while at Concordia, but it wasn't my main focus. It really didn't come into focus until after my freshman year at Manchester College, now Manchester University. I was at a crossroad trying to figure out what I really wanted to do with my life, and it was at that moment I switched my major to music performance. After receiving both of my college degrees in 2000, I continued to develop my saxophone skills by touring as much as I possibly could and networking with people in the industry that could help me reach my ultimate goal. In 2012, twelve years after college graduation, my dream was finally realized when I formally signed a recording contract under Megawave Records.
What was your education after Concordia?
Bachelor of Science degree in Music Performance from Manchester University and a Bachelor of Science degree in Psychology from Manchester University
What did you love most about CLHS?
I remember teachers at Concordia really caring about their students. It really felt like they were really on your side, pushing you to succeed. Here's a great example: Teachers would often set time limits to take exams, but when time was up, students would often ask the teachers for more time and 8 times out of 10 the teachers would grant everyone more time. If you didn't understand something during class, there was always a way to get in contact with them to allow them to explain it to you again. Concordia also instilled in me some pretty solid core values that have stuck with me my entire life, especially integrity, accountability, honesty, and perhaps the greatest value of them all, servant leadership.
What advice would you pass along to students?
Explore the "what if," be patient, and don't be afraid of rejection. Let me explain. Today's social-media driven, instant gratification, and perfectionist culture paints a very unrealistic view of success and what it takes to be successful. Exploring the "what if" is basically being honest with yourself and having the courage to explore whatever will make you excited to wake up in the morning. Only you can measure success, so be patient. The truth is that everyone considered successful has a very long and complicated back story of how they got there. Astronauts don't become astronauts right after receiving higher education. Teachers don't become principals or superintendents just because they have a teaching degree. Video game designers will not immediately get hired to work on the next 100 million dollar game right after getting a degree. Even I had to wait an additional 12 years after college before reaching my ultimate goal. So be patient. Lastly, don't be afraid of rejection. Rejection is not always a bad thing. Rejection is only bad if you don't learn and grow from the experience. Society tends to see rejection as failure and it's not. Maybe that particular company really has no space for you. Maybe the rejection is exactly what you needed at the time to help you improve your skills or to help find an alternative way to achieve your goals. Rejection can build character and resilience which may strengthen your desire to achieve your goals even more as it activates your flight or fight response making you unstoppable. Whoops, I guess I'm using my psychology degree there. Haha! But it's true!
Print