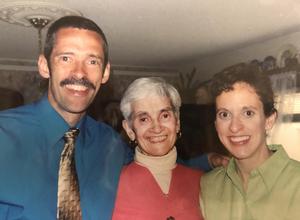 For this month's Alumni Spotlight, we wanted to feature a woman who had such a large impact on the Concordia community, Nancy (Smith) Murphy, Class of 1954.
Nancy (Smith) Murphy was a member of the Class of 1954. For many years, she served as the regular face for students in Student Services. After retirement, she continued to support by attending events, acting as a volunteer, and cheering them on at performances, particularly in the Drama Department. She passed away in December of 2020. This is the loving tribute written by her son, Chris Murphy, math and drama teacher at CLHS and a member of the Class of 1981.
*****

In the early morning hours of December 28, we got the phone call that my mother had passed away.  Knowing she is one of God’s children, we never struggled with knowing where she was now or that she was extremely happy to be healthy and reunited with her Lord.  However, not having our mom here on Earth with us was more of a challenge.

Our love for theater began at a very young age. Our parents took my sister, Jenny, and I to many theatrical productions, particularly at the Wagon Wheel Theater in Warsaw. We spent Thanksgiving holidays attending various dinner theater productions in the Midwest. We took acting classes at the Civic Theater. We participated in shows in high school, college, and even a couple community productions. On the directing side, I have directed shows here as well as at various grade schools and Jenny has helped to direct many lower grade musicals.

Throughout it all, our mom was ALWAYS our biggest fan. She rarely missed a production, no matter what role we played with each production. She ALWAYS told us how good we were, even when we knew our performance was less than stellar. She ALWAYS sent us a card to tell us how proud she was of us and how she loved seeing us use the gifts with which God has blessed us. She attended every show in which her grandchildren participated as well, and provided them with the same support she had given to us. In short, she was ALWAYS there.

In lieu of flowers at her funeral, we asked for donations to the Drama Department. Thanks to many generous donors, for whom we are very thankful, we have purchased a new light that now hangs with our other lights and shines on center stage. We wanted it to be there, so it could be used to shine on me while I make announcements for each show, but more importantly, when we pray before each show. It is our reminder that our mom is still in our heart and still “lighting” the way for us to be the Christian people she helped mold for so many years.

To God be ALL the glory!