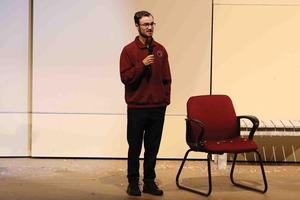 One Concordia student is the star of the show — but for his ability to write the play.
From the Spring 2022 Cadets Magazine
By Ashley Wiehe

One Concordia student is the star of the show — but for his ability to write the play.

Senior Michael Slack recently won a playwright competition through the Indiana Repertory Theatre. He was awarded a $1,000 cash prize for his show, “Lost at Sea,” a story about the journey of a man who works to discover how he arrived on the ship.

And now, Slack is getting to do the experience again as he writes a show for his Honors Academy project.

His show, “Right on Time,” which was performed on May 18, follows the interactions of characters at a train station, and the audience must try to solve the mystery of the strange station, Slack said.

“The idea for ‘Right on Time’ actually began while I was walking my dog with my sister, about two years ago,” he said. “We were listening to music, and a certain song came on. I’d heard the song before, but for whatever reason, on this particular day the song inspired a mental image: a mysterious train station where things aren’t quite as they seem.”

The song actually reveals the mystery behind the play, as well. But Slack did not want to share the details to spoil the show for anyone who has not seen it yet.

“Working on the show has been a long, tedious process, but a rewarding one,” he said. “The script took nearly two years to complete, mostly because I had no specific incentive to finish it, as I didn’t intend to use it for my Honors Academy project until later.”

Through the Honors Academy, all seniors are required to do a large project, of their choosing, with the help of a mentor. Students have written music, put together guides for studying abroad, and even designed children’s books. The scope of the project is only limited to their imagination.

“I have truly loved working with Michael on his (Honors Academy) project,” said Chris Murphy, CLHS drama teacher and Slack’s mentor on his project. “Michael approached me with the idea of being his mentor on this project, and I was so excited to get this opportunity to work with him. He is an incredibly talented young man who actively seeks ways to use the talents with which God has blessed him and working with him has been pure joy.”

Slack directed his project and worked with other Concordia students as the performers.

“Once I decided to use the show for my (Honors Academy) project, I had to turn a simple script into a physical production. That required lots of communication, as I reached out to poster designers, costume designers, tech help, and of course, lots of discussions with Mr. Murphy about how we might pull it off,” Slack said. “But my many supporters have been awesome, and I’ve already gotten to appreciate their great talents.”

As Slack prepares to study video game design at Miami University of Ohio next year, he reflects on his love of theater, especially during his time at CLHS.

“Theater has been my biggest passion in high school, and I knew I wanted to give back to my theater family in some way through my project,” he said.