Swim Legacy: Gibson continues with championship teams from his time at Concordia to now 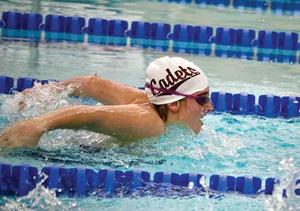 Sean Gibson has been a member of the CLHS swim community since his freshman year, when his relay team won state. Since then, he has gone from player to head coach, and his team has carried on the championship spirit — this year winning their fifth straight conference title.
From the Spring 2022 Cadets Magazine
By Ellie Walters ’25

Sean Gibson has been a member of the CLHS swim community since his freshman year, when his relay team won state. Since then, he has gone from player to head coach, and his team has carried on the championship spirit — this year winning their fifth straight conference title.

Even before his time at Concordia, Gibson grew up surrounded by the sport of swim, which he refers to as “the family business” because his parents, aunts, and uncles were all highly involved in it.

He was inspired by his coaches at Arlington Park, especially Tom Trent, to begin coaching swim in college. Gibson describes his team at Concordia as a great community of guys who all got along well, making swim a good experience for him and kept him coming back year after year. This is the kind of environment Gibson has worked hard to maintain while coaching swim at both Concordia and Arlington over the past 18 years.

“The closer the team is to each other, the more likely that they’re going to want to come back next season and feel like they have a place, which will allow us to train at a higher level as a group and feel like we’re part of something bigger than ourselves,” Gibson said.

He claims that his number one priority of improving the team is through relationships and growing closer to the Lord so that by the end of the season, the team feels like a family.

“For me as a coach, it’s about a lot more than the sport of swimming. There are some unique experiences, knowledge, and gifts the Lord has given me in this sport so that I can bring a sort of youth pastor mentality into coaching,” he said. “When I see kids a couple years after (graduating) and I have a relationship where I can ask, ‘Where are you at with your relationship with God?’ and ‘What is God teaching you right now?,’ I know God has given me an avenue to open those things up because that’s more of a lifelong thing.”

With this mentality, the boys’ team have won their fifth straight SAC championship and the boys and girls placed third and fourth, respectively, at sectionals this year with only 15 boys and seven girls. Concordia, being such a small school, thrives off of hardworking newcomers. Their coach refers to them as a “great group of talented girls and guys.”

“The team gave me a fun season with friendships and swimming success,” said senior Zac Shaw. “We were able to win another SAC championship and had a great season with our top guys improving beyond our season goals. I would never have been able to do what I did without our leader Coach Gibson.”

“This team has been a big family over the past four years to me. I’m so blessed to have so many good memories from swimming at Concordia,” added senior Katie McKay.

As for the future, Coach Gibson states, “I would love to continue the team atmosphere that we’ve been able to build over the last few years where the team is going to work exceptionally hard and grow together as a group and continue that success.”