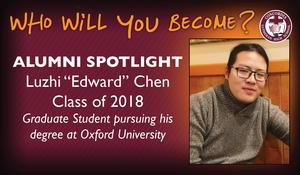 Luzhi "Edward" Chen, Class of 2018, was an international student at CLHS who just graduated from the University of California Davis and is continuing his graduate study at the University of Oxford. Read more about him in our Q&A.
What is your current occupation?
I am an international student who just graduated from the University of California Davis. I am going to continue my graduate study at the University of Oxford.
What led you to your current occupation?
My undergraduate majors are history and Middle Eastern Studies, and I decided to learn more about the history of the Middle East in the future. I am born and raised in China and have spent almost seven years in America. When I was still a student at CLHS, I am deeply influenced by the social science class that I have taken here. The inspiring lectures given by Mr. Morris trained my critical thinking ability, as well as stimulated my interest in learning more about history. I was intrigued by the Colonialist incidents and Orientalist ideas that have similarly influenced the history of both China and the Middle East history during my freshman year of college. Thus, throughout these four years, I have dedicated myself to relevant classes, and I am planning to improve myself in this field during my career as a graduate student.
What was your education after Concordia?
I went to the University of California Davis for my MA degree, with double majors in history and Middle Eastern studies.
What did you love most about CLHS?
I believed that the faculties of Concordia have offered me great assistance at my darkest time. I used to study at Canterbury High School, and I was dismissed because of academic misbehavior. However, Mr. Frerking decided to take me here as an international student, giving me a second chance to continue my study in America. Besides the spirit of forgiveness that I have received from CLHS, I have also received important guidance from other faculties at CLHS. Mr. Frederick, Mr. Dolde, Mr. Morris, Mrs. Walz, and many other friendly faculties have guided me with kindness, patience, and intelligence. Most of my precious memories of CLHS happened with the school band. I have made many friends there and was able to have a great time playing my baritone sax. I have also joined the marching band and the jazz band. CLHS has offered a place to not only get familiar with American culture but also cultivated my teamwork skills.
What advice would you pass along to students?
No matter what kind of difficulties you have met, please believe in yourself and you will overcome them.
Print