Leading into the future: Mychal Thom named executive director of the high school 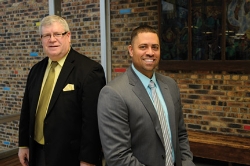 Mychal Thom has accepted the call to be the executive director of the high school following Terry Breininger’s retirement in 2016.
Spring 2015 Magazine
By Ashley Wiehe

He’s led school after school in his short career. He’s inspired basketball teams to victory and motivated students toward their future. He holds close a family of five at home and guides a family of 742 at the office. And at 37, he is one of the most sought-after Lutheran educators in the country.

Mychal Thom has accepted the call to be the executive director of the high school following Terry Breininger’s retirement in 2016.

“I consider it an honor to lead the organization into the future, and also a great challenge to keep it relevant and moving forward,” Thom said.

For the past three years, Thom has served as Concordia’s principal, and in that time, he has launched the new Honors Academy, created a better mentoring program to help new families feel comfortable at Concordia, led a team to develop a strategic academic plan to better position the high school for 21st Century education, and developed a professional development program to move the institution forward based on individual goals and planning.

And while he will be missed in that position, it has given him a unique perspective for the future.

“The benefit has been getting to know the teachers and getting to know the students. It’s simply to have these three years to get to know and understand Concordia,” Thom said. “The goal is when Mr. Breininger leaves that there’s a sense of comfortability.”

Breininger became the second executive director of the high school in 2008 following his eight years of service at the head of the Concordia Educational Foundation, the school’s endowment.

Breininger, a 1967 graduate of the high school, was called to Concordia in 1974 as a religion teacher and as an assistant principal before leaving to work for his family’s retail business in 1983. In 1995, he was named the gift planning counselor for the LCMS Foundation in Indiana, but returned to the high school in 2000.

During his time as the head of the Foundation and the high school, Concordia saw the creation of numerous academic programs, including the Career Internship Program and the institution of the One-to-One Technology Program. He restructured staffing to increase efficiency with business and communication operations, promote administrative leadership and improve professional development among all staff. He more closely aligned the endowment with the development work at the high school, oversaw the creation of the Cadet Fund — the school’s annual fund, and helped to locate The Lutheran Schools Partnership within the high school building.

Under his leadership, the school saw multiple state championships for fine arts and athletics; was named an Exemplary School for the past four consecutive years; and saw growth in enrollment and expansion of the endowment.

“Terry has had a long and dedicated history to Concordia and the church. His leadership of the high school has positioned CLHS to continue its mission and provided a vision that will serve our community’s students well into the future,” said CLHS Board President Robin Strasser. “Terry’s contributions to the high school are greatly appreciated.”

Breininger’s retirement comes on the brim of great changes for the high school — development of what space and programs will look like for a 21st Century institution.

“I’m really excited about what the future holds,” he said. “I want to see what life is like on the other side of Concordia Lutheran High School.”

Thom accepted the call in March to be the executive director of the high school. The process began nearly immediately for a new principal. An eight-member committee, led by Breininger and Thom, is conducting the search, and they hope to have someone in place by July 1.

With the help of a consultant, school administration has been developing a strategic academic plan that is looking at how programs will operate moving forward and how that works in a modern educational space. The committee is looking at candidates that can come alongside this plan and help to guide it into the future.

“This person will get to devise what it will look like for teachers and students,” Thom said. “In my opinion, it’s a tremendously attractive position for someone.”

Through this transitional time, Thom will be named the assistant executive director. He will work alongside Breininger and the new principal to provide a seamless transition for the school’s leadership.

“Our leadership is positioned to keep moving,” Breininger said about the next year.

As assistant executive director, Thom’s initial responsibilities will be to help get the new principal settled as well as continue his work with the professional development program, including continuing to work directly with teachers on their goals for the upcoming year. As the year progresses, he will work alongside Breininger with the board and other friends of Concordia, essentially building relationships that will be in place when he takes the executive director role full time.

“The organization affords the availability for us (to have this mentor relationship),” Thom said. “I think that truly is a blessing for us.”

As executive director, Thom will be responsible for overseeing the operation of the school. He will work with a team of administrators to lead the development, finance, academic, marketing, communications and enrollment programs of the school. He also will report to the board to strategically position the high school for the future.

Thom was called to Concordia in 2012 as the 10th principal of the high school. He previously served as the Head of School for Lutheran High North in Houston, Texas.
Attending Oakland University on a full academic and full basketball scholarship, he graduated with a bachelor’s degree in 2000.

In the spring of 2009, Thom was called to be the Head of School for Lutheran High North. After three years of service in Houston, he was called to be the principal at Concordia.
And since beginning his career at CLHS, much has changed in his life. He now serves as the chair of the Board of Directors for the Association of Lutheran Secondary Schools and on the faculty for the Van Lunen Center Christian Executive Management program. He and his wife, Lauren, welcomed a new addition to their family with the birth of Malachi (joining older brothers Jeremiah and Isaiah). But since day one, one statement has remained the same:

“(I want to) ‘pursue Christ-centered educational excellence that equips individuals for lifelong learning and service as disciples of Jesus Christ,’ ambitiously and with relevancy.”