Suttle family reflects on Concordia as foundation for family pride 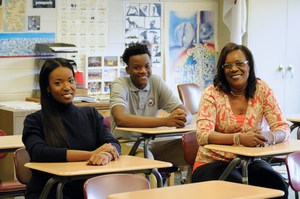 Passing on the Cadet tradition to future generations is extremely important to many of Concordia families, including the Suttle family, who is in its third generation at CLHS.
Three generations strong

Suttle family reflects on Concordia as foundation for family pride

Passing on the Cadet tradition to future generations is extremely important to many of Concordia families, including the Suttle family, who is in its third generation at CLHS.

Diane (Hardin) Suttle, Class of 1974, remembers her years at Concordia fondly. She was here in the days of Eugene Parker. She remembers Lois Roop, her home economics teacher, and the special way she supported and cared for each student. Concordia challenged her daily, giving her little playtime.

“Concordia requires your attention and in order to achieve your goals you had to apply yourself,” she said.

“I started working right after high school, but one thing I took from my time at Concordia was the importance of continuing my education and (going) to college where I received my degree in nursing,” she said.

Diane recently retired from her career as a registered nurse at Parkview. She knew what she wanted for her daughter, Angel, when it came to her getting a Lutheran education. After attending Bethlehem (now a part of Lutheran South Unity) for grade school, it was a no-brainer for Angel to carry on the next generation of being a Cadet.

“When it came to Angel, there was no discussion about whether or not she would attend Concordia,” Diane said.

Angel Suttle, the second generation of the Suttle family to attend Concordia, says that had she not experienced the Christian atmosphere at Concordia, she might not be as far along in her faith walk today.

“The teachers and friends at Concordia that prayed with me and supported me, along with a foundation in scripture, played an important role in my life,” said the 2000 graduate.

It was teachers like Michelle Converset — a favorite for her and her son — that Angel describes as having a “beautiful spirit.” Another beloved teacher that she shares with her mother is Bill Ihssen, a former English and Religion teacher who taught at Concordia from 1961-1998. Angel loves having Concordia connections with both her mother and son.

“It’s so neat to have these connections linking our past, present and future,” Angel said.

Angel was a cheerleader, peer minister, student council member and a member of the French Club, with which she had the amazing opportunity to travel to Paris when she was 17 years old.

“This was such an amazing experience to go abroad with the students and teachers from CLHS,” Angel said. “It allowed me to expand my horizons, and this experience is why I decided to expand my business into international travel and exposure.”

She is the CEO and founder of Halo Media Inc., a public relations firm in Fort Wayne, and she recently had the opportunity to go to Cape Town, South Africa, to assist a client with her business endeavors there.

After high school, Angel went to Purdue University for one year and then completed her degree at Indiana Tech in business management. She holds an associate degree in engineering and started out pursuing a career in that field.

After an engineering internship with the City of Fort Wayne, Angel decided to switch gears and pursue business marketing. She worked with Indiana’s NewsCenter for three years before she decided to step out on faith and start her own public relations company, which she has now had for seven years.

“I think Concordia instills a certain courage and bravery in a person that helps you to feel like, with God on your side, you can do anything,” she said. “That’s where my courage came from.”

For Adanis, Angel’s son, he was the one to ultimately make the decision to go to Concordia.

He went to St. Paul Lutheran School and then wanted to go on to Concordia, where his friends were going, but also to carry on the Cadet tradition.

For Angel, who witnessed first-hand, the impact that having a Concordia education has on a person’s future success, it was an easy decision for her to make sure that her son got the same opportunity she had.

“The education received at Concordia really elevates you for the future on college applications, resumes, in volunteer opportunities, etc. It puts you two steps above the rest,” Angel said.

What Adanis, a freshman this year, enjoys most about Concordia is the relationships formed with other students.

But he said that he feels like he has some big shoes to fill with the reputation of two Cadets having passed through these halls already.

Angel looked over at her son and said, “My mom and I want to make sure he carries on a positive reputation for the Suttle name.”

Adanis plays basketball and golf and might join the football team next year. While he’s not sure yet, he has some dreams of becoming either a lawyer or an architect after graduation.

Pride is one of the main emotions felt by both Diane and Angel when it comes to their family. Diane is extremely proud of her family and is thankful that she has been able to provide for them. She feels extremely blessed that Adanis is able to attend Concordia.

“Sometimes you don’t realize how important that foundation is until you become a parent yourself and want the best for your children,” Diane said. “You have to have that walk with Him.”