What I did this Summer 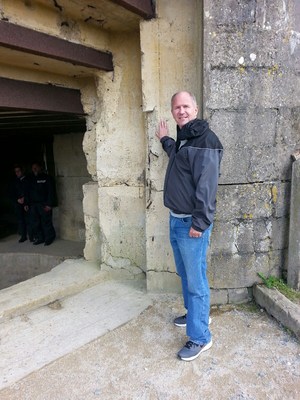 What made the visit even more special was that it was June 6, the actual anniversary date of that bloody conflict. Even more special was talking with a few veterans of other wars like the Vietnam War who were also visiting that place. I always remembered to say “thank you” to each one I met as each had actually put his life on the line to defend my freedom.

One of the places in that area had actual German bunkers that we could enter and see how well built these fortifications were. It was here that I began to think of another war, and another “Who” who had put His life on the line for my freedom. That war was between God and Satan. Satan had captured us due to our sin. Jesus willingly chose to pay our penalty to satisfy the justice demanded by the Law. Viewing one bunker brought Easter to mind. The bunker was empty, just like the Tomb of the Resurrection in Jerusalem is!

It is times like this that I find interesting parallels of real life and Christianity. Unlike many religions of the world, ours is intimately tied to history in that actual historical events can bring Biblical Truths to mind. But the one thing that makes Christianity the “One and Only True Way” to heaven is that we are the only ones with an Empty Tomb. May this certainty bless you with confidence in sharing the Way, the Truth, and the Life with those you meet this summer.