Taking Center Stage: Grad’s story of how Concordia started it all 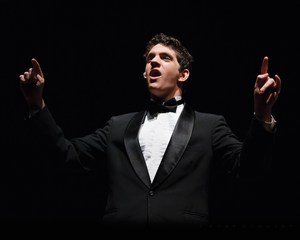 Break a leg! Andrew Bower, a 2016 Cadet graduate, is starring in a number of local theatrical productions and credits Concordia for jump-starting his journey to Broadway.

From the Fall 2017 Cadets Magazine


Break a leg! Andrew Bower, a 2016 Cadet graduate, is starring in a number of local theatrical productions and credits Concordia for jump-starting his journey to Broadway.

“The Concordia drama department inspired me to study theater as a secondary education major,” he said. “I knew going into high school that the drama department would make the biggest impact on my high school career, and looking back, it even exceeded all of my expectations. It was amazing.”

Bower, who now attends Huntington University and is studying theater performance, still reminisces of his days spent on the Cadet stage. His favorite Concordia play was a spring “Gieschen play” called “How the West was Done.”

“It was so fun to play the schizophrenic kid and try to master a multi-personality character,” he said. “I remember playing the good guy with a white hat in one scene and a bad guy with a black hat in another.”

What Bower loved most about the program was its directors – Chris Murphy and Chris Gieschen.

“Mr. Murphy was an influential figure in my life because he helped me figure out what I wanted to do after graduation. On the other hand, Mr. Gieschen showed me how fun the stage could be,” he said.

Although most comfortable in the limelight, Bower always considered himself a student first and performer second.

Bower was involved in more than 11 productions at the high school and still maintained high standings in his class. He even earned the title of National Thespian for his academic and theatrical abilities.

Bower also enjoyed participating in the media arts department. While in the program, he sought mentorship with teacher Nathan Gotsch, who helped him discover his love for closed-production acting.

“I remember when Mr. Gotsch convinced me to attend an acting class with him on a Saturday morning to show me how different TV acting was from stage acting,” he said. “It was a really cool experience.”

Bower believes that the opportunities given to Concordia students is unmatched and well worth the investment.

“Having encouraging role models at school like Mr. Murphy, Mr. Geischen and Mr. Gotsch was life changing,” he said. “The opportunities that Concordia gave me to expand myself led me to believe that I could pursue acting as a career and further chase my dreams.”

“I am convinced that Concordia is the best high school for the arts in the city, if not the county or state,” he said. “Concordia students are crazy talented and are strongly supported by the faculty, staff and community. I hope no one takes that for granted.”

The Cadet turned Forester still values his roots at CLHS and cherishes the friendships he made with students, alumni and faculty. Bower says that more than anything else, the family aspect of Concordia will always draw him home.

“I’ll always be coming back over the years,” he said. “Concordia has become such a huge part of my life, and I love it so much,” he said. “You can bet that I will be back to see what the fine arts department will do next.”

Bower hopes to take what he’s learned at Concordia to the big city, where he looks to audition at several major theaters.

“Once I graduate college, I’ll probably look for work in a larger city with many theaters, like New York City or Chicago,” he said. “I’m also looking into pursuing a career in voice acting, or perhaps I could anchor on a local news network or radio station.”

While still unsure of the exact career path he will choose, Bower knows that whatever he does, it will be centered on performance.

“I don’t need to perform in front of a million people. I’m just looking for my dream to be achieved,” he said. “I’ve always said that as long as I’m performing and doing what I love, I’ll be happy.”