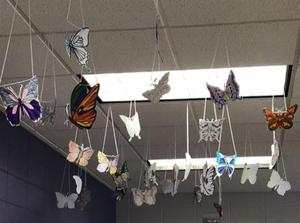 Shortly before Fall Break, students wrapped up their reading of Night, a Holocaust memoir written by Elie Wiesel. We added this book to the English 10 curriculum this year as a central part of a unit on social justice.

I never saw another butterfly ...
The last, the very last,
so richly, brightly, dazzling yellow.
Perhaps if the sun’s tears sing
against a white stone ...
Such, such a yellow
Is carried lightly ‘way up high
It went away I’m sure because it wished to
kiss the world goodbye.
For seven weeks I’ve lived in here,
Penned up inside this ghetto,
But I have found my people here.
The dandelions call to me,
And the white chestnut candles in the court.
Only I never saw another butterfly.
That butterfly was the last one.
Butterflies don’t live here in the ghetto.

— Adaptation of Pavel Friedmann’s I Never Saw Another Butterfly

Shortly before Fall Break, students wrapped up their reading of Night, a Holocaust memoir written by Elie Wiesel. We added this book to the English 10 curriculum this year as a central part of a unit on social justice.

In addition to seeing Wiesel’s firsthand account of his time in the Nazi death camp known as Auschwitz, sophomores also were able to take a small peek into the lives of other children that lived during the Holocaust.

Compiled in the book I Never Saw Another Butterfly are poems and drawings created by children who lived at Terezin (a transit camp) and who were eventually deported to Auschwitz.

During the week of Thanksgiving Break, students were each given one poem from the compilation. They read and analyzed their poem, looking for any hints and details of the child who penned it. Students then chose a butterfly silhouette and decorated it, choosing colors and designs that they felt best represented the child and the experience described in the poem. Thus, our classes began the first steps of a national Holocaust remembrance project known as The Butterfly Project.

The project receives its name from the poem for which I Never Saw Another Butterfly is named after. In this poem, Pavel Friedmann subtly shows the loss of innocence that occurred in the ghettos, and like the innocence that could not survive, many children, the most innocent of all, were unable to survive the camps. As noted in the book, “Fifteen thousand children under the age of fifteen passed through the Terezin Concentration Camp. Fewer than 100 survived.”

We hung the butterflies students had created in remembrance of the children of Terezin from the ceilings of our classrooms, where they remained throughout the rest of the unit.

On the last day of the unit, we provided students with the recorded fates of the children they had briefly met through poetry. If the child survived the Holocaust, the butterfly remained in its place; however, if the child perished, students cut the butterfly down from the ceiling.

Some poems had anonymous authors, but because of the low number of children that were recorded as surviving, we did not assume that many of the unknown authors were liberated. And then we were left with after we finished reading the fates of the surviving butterflies/children.

As Pavel Friedmann stated in his poem, many butterflies could not survive the brutalities of the ghettos and camps.

A key reason we chose this project and Night was to show students the importance of remembering the past so that the mistakes of history are not repeated in the future.

As Elie Wiesel stated, “For the dead and the living, we must bear witness.” After wrapping up our study of Night and the Holocaust, students researched recent genocides in order to understand both why the Holocaust is so important to study and remember and how we can apply the lessons from that period to the world we live in today.

Though this is a unit in which the materials we read and study convey much despair, sorrow, and grief, we also wish that it is one that ends with a hope for a better tomorrow.