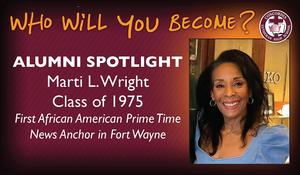 Marti L. Wright, Class of 1975, was hired as a general assignment reporter for WPTA-TV, 21 Alive in September of 1981. Throughout her nearly 20 years at 21 Alive, Marti worked her way up in the organization, serving as weekend anchor/reporter for 14 years. In 1987 Marti was promoted, becoming the first African American prime time news anchor in Fort Wayne. Read more in this Q&A about her.

Marti L. Wright, Class of 1975, was hired as a general assignment reporter for WPTA-TV, 21 Alive in September of 1981. Throughout her nearly 20 years at 21 Alive, Marti worked her way up in the organization, serving as weekend anchor/reporter for 14 years. In 1987 Marti was promoted, becoming the first African American prime time news anchor in Fort Wayne.

In 2021 Indiana Congressman Mark Souder released a book titled, "Television in Fort Wayne 1953-2018." The book is a 65-year historical perspective of the role Fort Wayne television played in the local region and nation. In the book, a piece was written about Marti's accomplishments at WPTA, 21 Alive. Congressman Souder donated a copy of the publication to Concordia Lutheran High School.

"I'm honored to be proud of the rich history of Fort Wayne Television,” Wright said. “It was more than a job to me; it was an immense responsibility to report the news to viewers who relied on our unbiased coverage of daily events in our region."

After graduating from Concordia, Wright attended Hillsdale College in Hillsdale, Mich., and she graduated from IPFW in 1979 with a B.S. in Political Science and English and a Communications minor.

What did you love most about CLHS?

I loved the long-lasting friendships and also memories of being at a Christian high school. I loved all of my teachers, from English teacher Miss Shrubsall, and typing teacher Miss Ross who was a character! Speaking of characters, my Government Teacher Mr. Gemmer always made class enjoyable. And although Algebra never captured my heart, my teacher did, that was Mrs. Retrum. And I also enjoyed the friendships that were tied to Bethlehem Lutheran Church and my neighborhood. Facebook has helped me re-connect with some of my CLHS classmates, which I haven't been in contact with in nearly fifty years! It has been a true blessing conversing with them!

What advice would you pass along to our students?

Study hard, work harder. Make the most of your high school and collegiate years. Keep your friends close — you have no idea how meaningful it will be later in life. And make the best of each and every day! Trust me, the years fly by after your mid-twenties! Remember to always ask questions, there is never an unintelligent one, and you MUST learn something every day of your life. Love with all your heart, and love the Lord with all your might. Believe me, as you get older, your relationship with God will get you through the most challenging of times. By the way, those challenges will make you “uncomfortable,” but that's how you grow and learn. Challenges make you stronger. So, embrace them, learn from them, and pass that knowledge onto others!