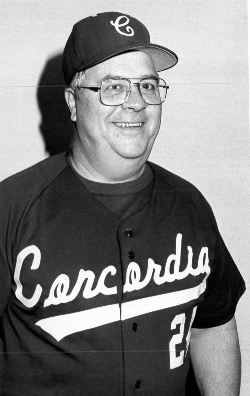 This spring, the Concordia Lutheran High School baseball field is being named in honor of one of the greatest coaches in the history of the school, Jack Massucci.
Feb. 17, 2015

FORT WAYNE, Ind. — This spring, the Concordia Lutheran High School baseball field is being named in honor of one of the greatest coaches in the history of the school.

Jack Massucci coached the baseball team for 34 years, retiring in 1996 with a record of 520 wins and 354 losses. His number, No. 24, is the only number in the history of Concordia baseball to be retired.

Massucci Field will officially be unveiled at the April 25 home game. The rain date will be May 9.

“Jack’s true love has always been baseball. Not only did he have tremendous knowledge of the game, he was able to create a relationship with his players that made them truly commit to Concordia baseball — not just for a season but for a lifetime,” said Dean Doerffler, CLHS athletic director. “I can think of no other coach who has had more influence on young people in the field of athletics at Concordia than Jack Massucci.”

Along with leading the Cadet baseball team, Massucci also coached football, basketball and wrestling. He was a member of the Fort Wayne Baseball-Softball Commission for 25 years, receiving the Charles Wilt Award and the Fort Wayne Sports Corporation Community Service Award. He is currently the vice president of the Wildcat Baseball League.

A special ceremony will be held at the April game to honor Massucci with a reception to follow.

“Jack Massucci exemplifies what it means to be a Concordia Cadet,” said Terry Breininger, CLHS executive director. “Naming the field in his honor is just a way for us to give back to a man who has done so much for this institution over the years.”