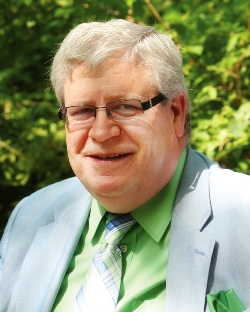 After 15 years at the helm of Concordia Lutheran High School and the Concordia Educational Foundation, Terry Breininger is retiring as executive director of the high school.
Feb. 17, 2015

FORT WAYNE, Ind. — After 15 years at the helm of Concordia Lutheran High School and the Concordia Educational Foundation, Terry Breininger is retiring as executive director of the high school.

Breininger, a 1967 graduate of the high school, was called to Concordia in 1974 as a religion teacher and as an assistant principal before leaving to work for his family’s retail business in 1983. In 1995, he was named the gift planning counselor for the LCMS Foundation in Indiana. And then in 2000, he returned to Concordia as the head of the Concordia Educational Foundation, the organization’s endowment, and was named the full time executive director of the high school in 2008.

As executive director, Breininger oversees the operation of the school. He works with a team of administrators to lead the development, finance, academic, marketing, communications and enrollment aspects of the school. He also reports to the board to strategically position the high school for the future.

During his time as the head of the Foundation and the high school, Concordia saw the creation of numerous academic programs, including the Career Internship Program, the institution of the One-to-One Technology Program and the Honors Academy. He restructured staffing at the high school to increase efficiency with business and communication operations, promote administrative leadership and improve professional development among all staff. He more closely aligned the endowment with the development work at the high school, oversaw the creation of the Cadet Fund — the school’s annual fund, and helped to locate The Lutheran Schools Partnership within the high school building.

Under his leadership, the school saw multiple state championships for fine arts and athletics; was named an Exemplary School for the past four consecutive years; and saw growth in enrollment and expansion of the endowment.

“Terry has had a long and dedicated history to Concordia and the church. His leadership of the high school has positioned CLHS to continue its mission and provided a vision that will serve our community’s students well into the future,” said CLHS Board President Robin Strasser. “Terry’s contributions to the high school are greatly appreciated.”

Holding a bachelor’s degree from Concordia University, River Forest and a master’s degree from Christ Seminary, Breininger is a member of the Association of Lutheran Development Executives, the Planned Giving Council of Northeast Indiana, the Partnership for Philanthropic Planning and the Lutheran Education Association. Breininger has received several awards for his work in gift planning, including being named the top gift planner in the country by the LCMS Foundation during his time there.

Breininger will retire in 2016, and a qualified candidate is currently being sought by the school board.