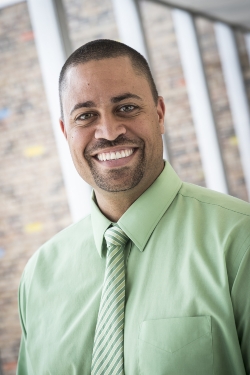 After serving as Concordia Lutheran High School’s principal for three years, Mychal Thom has accepted the call to be the executive director at the high school. The search for a new principal is under way.
April 2, 2015

FORT WAYNE, Ind. — After serving as Concordia Lutheran High School’s principal for three years, Mychal Thom has accepted the call to be the executive director at the high school. Thom will assume the position after Terry Breininger retires in 2016.

As executive director, Thom will be responsible for overseeing the operation of the school. He will work with a team of administrators to lead the development, finance, academic, marketing, communications and enrollment programs of the school. He also will report to the board to strategically position the high school for the future.

The CLHS Board of Directors offered Thom the executive director position after much prayer and discussion. While other candidates were considered by the board and its search committee, a full national search was not conducted because the board believed that it had a strong internal candidate in Thom.

A search, led by Breininger, Thom and a committee, has begun for a new principal.

Thom was called to Concordia in 2012 as the 10th principal of the high school. He previously served as the Head of School for Lutheran High North in Houston, Texas.

Attending Oakland University on a full academic and full basketball scholarship, he graduated with a bachelor’s degree in 2000.

Thom also currently serves as the chair of the Board of Directors for the Association of Lutheran Secondary Schools and also serves on the faculty for the Van Lunen Center Christian Executive Management program.