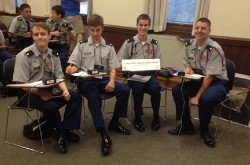 The JROTC team took fourth place in the nation at the 2015 Army JROTC Academic Bowl Championship, beating out more than 1,500 teams from around the country.
July 2, 2015

FORT WAYNE, Ind. — The JROTC team at Concordia Lutheran High School took fourth place in the nation at the 2015 Army JROTC Academic Bowl Championship, beating out more than 1,500 teams from around the country.

The competition pitted JROTC teams against each other in a battle of wits, from knowledge of math and literature to humanities and science. This is the first year that Concordia has participated in the academic bowl.

“They did great,” said SFC (R) Alan Conrad, who leads the JROTC program at Concordia. “I asked them how they prepared, and they said, ‘We did our studies.’”

Teams qualified for the competition by advancing through two rounds of competitive online play against 1,512 other teams. Concordia’s team qualified among only 24 Army JROTC Academic Bowl teams in the nation. Concordia’s academic team was comprised of c/MAJ Mitchell Scott, c/2LT Tucker Bennett, c/2LT Jackson Wagoner and c/Derek Egolf. The competition took place at The Catholic University of America in Washington, D.C., on June 26-30.